Ah - one of Roger's nasty clippers! It'll sound like crap, then.
"Why is my rig humming?"
"Because it doesn't know the words!"

Flex are going to playlist at 9pm, with the full 24/7 service starting at 7am.
Top

When Heny G was interviewing people you could barely hear them speaking like the mic Heny was holding was only just picking up the other persons voice or they were right over the other side of the room from the microphone. Early days still I suppose... trial and error.
Top

But the test broadcasts were correct for that to fix all those issues.
Top

Damn. They have obviously tweaked something recently because I can't hear them any more. Last week I could hear them weakly when they were broadcasting the test loop, and I suspect they were putting out more horizontal power then. With only 15 watts horizontal now I think I would need a very good short-range lift to hear them.
Top

Very bad reception in Surrey / Hampshire borders. Mainly down to f****** Classic fm cutting in and out

Nick_G wrote: ↑
Sun Jul 01, 2018 9:41 pm
Damn. They have obviously tweaked something recently because I can't hear them any more. Last week I could hear them weakly when they were broadcasting the test loop, and I suspect they were putting out more horizontal power then. With only 15 watts horizontal now I think I would need a very good short-range lift to hear them.

They aren't putting out any power at horizontal plane any more, the 35w (V) + 15w (H) station I previously quoted was for 96.9MHz London.
But yes no doubt you are right, after removing their 2 horizontal dipoles your horizontal beam isn't picking it up any more.
Last edited by teckniqs on Mon Jul 02, 2018 8:41 am, edited 2 times in total.
Top

Also this weather isn't helping sometimes classic on 101.5 has been strong when normally you would not get it and 101.1 cutting out unique fm
Top

Why are you surprised? It's hardly surprising for a station that's fully vertical like Flex have changed over to now after removing their 2 horizontal dipoles for it to not be received with a fully horizontally polorized beam. If Nick_G's beam was vertical then it would still receive Flex with their new fully vertical aerial system.
Top

No. The only I used to get was some African station on 101.15. My area is pretty dead now for receiving anything! Use to hear Kool pretty good up til when they disappeared. Just use tune in now like most people but do like checking the fm now and again
Top

Oh yeah the wonderful radio nijer 101.1 fm I am not sure if it's still going or on reduced power I used to be able to pick them up and unique even though it was only 1 point apart
Top

The DnB DJ on now has really screwed up the sound on the stream, coming out more on one channel than the other.
Top

Sorry, it's unlistenable at the moment on the stream. Level issues, right channel is louder than the left channel, balance is not straight. I hear some compression so it sounds like there is something on right now, but the source is F. up.
Top

Seems to have improved now since Twiz came on at midnight, but there is some distortion on the heavy bass tunes.
Top

Ofcom have their page up for Flex, but the Key Commitments and Coverage Area maps aren't up.

Mic is not understandable, it's far a away in the right channel.
Top 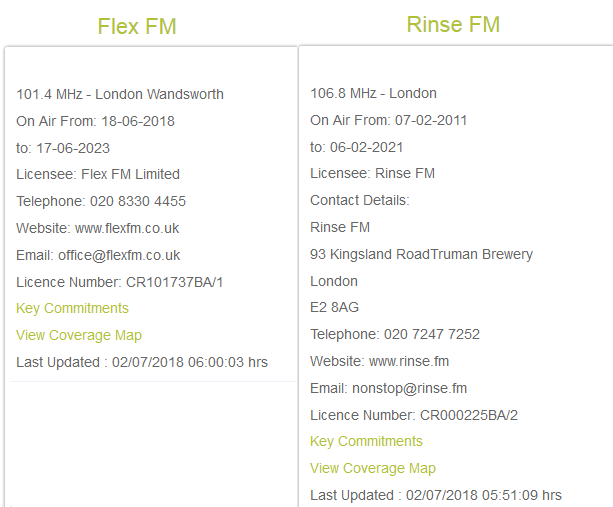