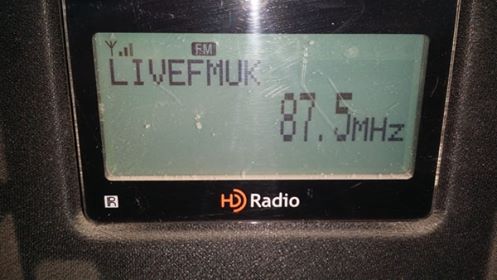 I don't think it's live it's a new one live was never strong in Slough the rds has different letters up looking like inocence?
Top

So there are now 2 Raw's on opposite ends of the dial being picked up in the same area? WTF?!

And that spelling of Innocence is a complete mindfuck! It's giving me a migraine! Jesus!
Top

I,ve just this minute been told by a mate of mine that RAW are banging through on this frequency up on high ground near Oxford.

That's the new raw the old raw is also on so there are now 2 raws?
Top


Sent from my iPhone using Tapatalk

Actually there were three,

Picking it up in milton keynes on a makita radio and an extra bit of metal cut to about 86cm !

Keep on keepin on
Top

As for the Raw name the first station to use the name was an early 90s soul station on 93.1 before the BBC put radio 4 on 93.2 from crystal palace
Top

@fame fm your thinking of uks finest on 87.5fm i done a few sets there it was booming everywhere getting messages from Swindon to Birmingham. thinking this rsw innocence if its coming from oxford ways and the dial is 87.5 its probably same ppl behind uks finest years back . not uk raw radio which is on 107.5 in west
Top

Anyone got a web stream/tunein link for this?
Top

No I do remember UK finest also being strong a few years back I am definitely talking about the 2 to 3 years ago raw was also strong I was driving to Wiltshire a lot 2 years ago and it was very strong until livefm UK decided to nick 875 about 2 year's ago. I am not saying I know about this new raw if it's nothing to do with the present 107.5 lot why use the same name again?
Top

pure94
no manz can test innit

I remember how strong the signal used to be out of London and west way a few year ago as well. When I went west country for camping and stuff it was the station of choice down M3 M4 M40 ways.
Top

When it was uks finest coming from good ol ********* ********* you could hear it in bristol gloucester and even on some parts of Somerset it really was a massive signal if you think it was hitting near Birmingham heading north and Milton keynes etc aswell. Funny thing is as soon ad you got off at Bracknell m3 junction and head baxj towards London it was near enough unlistenable by the m25/m3 junction

Please DO NOT give out TX locations here. You only get one Warning!